On Monday, September 19, 2005, Ross was awarded the LOMA Education Award at that year’s LOMA conference in Orlando, Florida. Ross is only the 22nd winner of the award that “was created more than 20 years ago and recognizes outstanding contributions to LOMA’s professional education programs. It is the highest honor LOMA can bestow on an individual in the insurance and financial services industry.”

About being nominated and receiving the award Ross says:

“I remain somewhat in shock from the accolades and the Award itself that was bestowed upon me last week in Orlando, Florida at the LOMA Annual Meeting. When one starts criticizing and getting involved in an industry educator like LOMA one never aspires to any kind of ‘reward’.”

“I would do it all over again just for the sheer education returned to me via the LOMA staff, committee members from all disciplines of our industry and the commardarie that comes from building a better course of study, book or examination. From the early days of Gene and Margaret through the great counsel of Bill and then on to the new leaders of Kathy, Joel, Dean and Dennis it has been extremely rewarding for me.

Thanks to the nominating committee for picking me out of the crowd of volunteers that give so much of their spare and precious time. Thanks to Kathy for the initial call with the news and to Joe for the call that made it even ‘more real’ for me.” 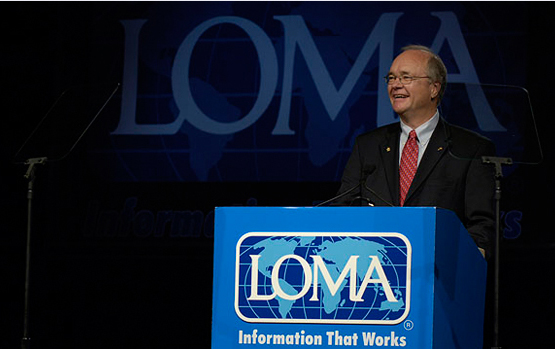 The following is from what the nomination committee put together:

“It would be hard for anyone on LOMA’s E&T staff to imagine the last three decades without Ross Morton. Since earning the FLMI designation in 1972, Morton has been a willing and active participant in LOMA education and training strategy and initiatives. While his LOMA contributions are substantial, it is noteworthy that Morton’s contributions to insurance education extend beyond his LOMA involvement.

As an “up and coming” underwriter and new FLMI in 1972, Morton so impressed the LOMA management team that they recruited him to serve as editor and contributing author for a new LOMA text on underwriting.

Morton remained involved with LOMA, and over the years, has served on numerous curriculum development panels in the area of underwriting. He is currently a reviewer for the revision of the LOMA text, LAW TEXT. He has also served on the LOMA Examination Committee and reviewed the Selection of Risks course exam for a number of years.

In addition to his excellent contributions as an educational advisor on the technical course and exam level, Morton’s “outside the box” thinking made him a major contributor to LOMA education and training at the strategic level. He served on LOMA’s E&T Council on three occasions and each time was known and respected for his willingness to both ask hard questions and help LOMA find the answers. During his first term from 1978-1981, he participated as the E&T Council and guided a total renovation of the FLMI Program curriculum that included the addition of a marketing elective. In 1985-1986, he contributed to the Council’s strategic planning process that resulted in the addition of a financial services elective course, the development of LOMA’s first online testing system, and a strengthening of the role of FLMI Societies. In his most recent (2000-2002) term as a Council member, he helped to shape the structure and content requirements of LOMA’s new Fellow, Financial Services Institute (FFSI) program.

Morton served as an Executive Vice President of RGA Life Reinsurance Co. of Canada, for 11 years and remains very active with RGA, advising, auditing and mentoring its staff and customers around the world. Prior to his  years with RGA, his career included service at an executive level with Manulife Financial, and Storebrand Reinsurance. He began his career at Royal Insurance Group and worked for a number of years at The Mercantile and General Reinsurance Company.

Morton is well known as an international speaker on underwriting, management and reinsurance. He has written articles for publications including Cover, Canadian Journal of Life Insurance, On the Risk, Marketing Options and Journal of Insurance Medicine.”

Designed to provide recognition to an individual who has made an outstanding lifelong contribution to LOMA’s professional education and learning programs and to insurance and financial services industry education as a whole, the LOMA Education Award is LOMA’s highest education honor.

The LOMA Education Award was established more than two decades ago. Although it is not awarded every year, this honor has been bestowed upon 22 individuals whose contributions and service to LOMA’s professional education and learning programs have increased their potential to raise the caliber of professionalism in the insurance industry. LOMA’s Education & Training Council selects award recipients, and the award is presented during LOMA’s Annual Conference & Conferment.

You can read more about the award and it’s previous winners here: http://www.loma.org/learn/awards/default.aspx