Since Ross published his first book 11 years ago, he began thinking about what he was going to put in his second book, and it is finally here!

From the Forward to the book:

“The author, Ross A. Morton, was born in Harrison, Ontario, a small town that, along with his parents, gave him a great sense of honesty, integrity and genuine interest in, and value of, people from all walks of life. In this book, Ross’ pride in his family origins are reflected in the often referred to experiences growing up in his small town and later the city. There is no doubt that there origins instilled the moral values which have served hi throughout his very successful career in the life insurance field. It is those very characteristics which given not just his business life but his persona life and relationships from is beginnings in Harrison to the many business associates he has encountered across the world over the years.” 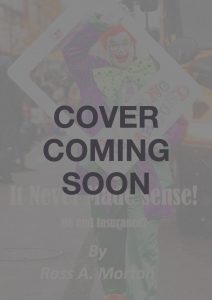 “Ross Morton writes from the heart – and shares stories that will make you smile, smirk and even grimace. His adventures, whether in business, travels or mentoring, include a lesson for all. An entertaining read that I highly recommend.”
— Caron Czorny, Past Chair, The Financial Advisors Association of Canada

“Ross refers, many times in his book, to his adventures in far off places with humour despite the fact that many of these often resulted in dangerous situations with regard to his personal safety. How many people in the underwriting profession, never mind life insurance, can relate to encounters which include being placed in the trunk of a cab for safety during rioting in Manilla, avoiding a suicide bomber in Jakarta and being in Mumbai when terrorists attacked?”
— Ross Johnson, Former President of National Life of Canada

“So many emotions are in it. You have caught it all, sadness, bravery, hope and humour. You have a natural gift, well done!”
— Margaret Brundle, Northern Ireland